Who Goes First? For Couples, Retirement Is All About Timing

Retirement timing usually boils down to dollars: Couples plan to retire when they’ve got enough to maintain the kind of lifestyle they want for as long as they expect to live. That number will be different for everyone, and how much couples need to save varies widely based on their ages, debts, lifestyles, monthly expenses, and even where they live.

One constant, though, is the time value of money, says Marta Nystrom, a certified retirement financial adviser in Santa Fe, N.M. As inflation drives up costs from year to year, couples need to recognize that they will need far more money 10 years from retirement just to maintain their status quo. The younger they are when they retire, the more inflation is going to affect them.

And sometimes that leads to a decision to have one spouse—often the higher breadwinner or a much-younger husband or wife—stay in the work force longer than the other.

Health insurance is another reason some couples stagger retirement. Medicare doesn’t kick in until an individual reaches age 65. That means folks retiring before that need to come up with their own coverage, and few retirees have coverage from their former employers.

It is not an insignificant expense. According to the Towers-Watson Employer Survey on Purchasing Value in Health Care, an individual retiring before age 65 can expect to pay upward of $4,200 a year for single-only coverage. If both spouses retire, that price tag tops $8,400.

“A lot of people have never had to personally pay the premiums,” Parker explains, noting that many employers either picked up the whole or a significant portion of the monthly or annual cost while retirees were working. “When they see how much money it is going to cost, even with high-deductible plans, it’s kind of sticker shock.”

Parker adds that even if a couple can afford the premiums, a significant health issue could motivate one spouse to work longer if it meant better coverage or more continuity in care.

For couples things get trickier, and there seem to be endless configurations of election and suspension strategies that enable couples to maximize their collective Social Security benefits. The gist is that individuals can elect a reduced Social Security benefit as early as age 62 or delay until age 70 for a maximum benefit. This can increase benefits by as much as 32%, Nystrom says.

There also are a few timing or “switching” strategies that allow couples to increase their overall Social Security payouts.

For example, if both the husband and wife worked, the husband might take a spousal benefit of half of his wife’s Social Security amount at his full retirement age, and allow his own Social Security benefit to continue to grow up to age 70. At age 70, he might then switch to his own, higher, benefit. The strategy also could work in reverse.

The math is different for every couple depending on ages, earnings, and timing. The differences, though, can amount to tens of thousands of dollars. That is why couples should carefully consider all the possibilities so they can maximize their total Social Security benefit, Nystrom says.

“For deferring between the ages of 66 and 70, they’re getting a guaranteed 8% increase plus a cost of living increase,” she says. “Couples are going to increasingly utilize these switching strategies to maximize their joint lifetime benefit.”

Parker adds that the math is different for each situation. “Every couple is going to need to sit down and work the numbers to figure out the best way to optimize those benefits,” Parker says.

No shame in staggering

There is nothing wrong in staggering retirement, whether to maximize retirement income or for personal reasons, Nystrom says.

The truth, she points out, is that retirement is an individual decision as much as it is a joint one. “Most of my clients don’t retire at the same time,” she says. “I generally don’t see that causing friction.”

“Bad decisions will be made if you can’t get both people in to talk about it and voice some of the feelings,” she says.

Sometimes one spouse does stick it out longer, but the other one contributes by picking up more of the slack at home and taking on bill paying and personal financial management so that the working spouse’s off-hours really are relaxing and rejuvenating. “Look for roles the nonworking spouse can fulfill,” she says, “so it doesn’t seem like that nonworking spouse is sitting around watching TV all day.”

Beyond the dollar and cents

While the numbers get the most attention, finances aren’t the only factor in retirement decisions. Couples also need to have what Jack Stephens, a financial coach in San Antonio, calls the “expectation talk” to make sure they both have the same kind of retirement in mind. “Not being on the same page is a big problem,” he says.

To help his clients, Parker has each spouse write out a purpose statement, to “really define what the next stage of life is going to look like,” he says. Finding purpose is critical, he says, because it determines how much money and even how much time they need in retirement. “The money is just the tool that allows you to accomplish your goals and dreams.”

Taleris Nominating Committee Is Seeking 2020 Board of Directors candidates

The Taleris Nominating Committee is seeking candidates for positions on the Board of Directors. As a director, you will be responsible for working with management, fellow board members and other volunteers in an effort to shape the future of Taleris. As a volunteer, your commitment will be approximately 4 to 6 hours per month and your input will be highly valued. General business experience is preferred and a desire to help others is a must.

You are leaving www.taleriscu.org. Taleris Credit Union does not provide, and is not responsible for, the product, service, or overall website content available at a third-party site. Taleris Credit Union neither endorses the information, content, presentation, or accuracy, nor makes any warranty, express or implied, regarding any external site. Our privacy policies do not apply to linked websites. You should consult the privacy disclosures on any linked site for further information. Thank you for visiting our website. By clicking Continue, you will be directed to a site maintained by the Federal Trade Commission.

You can bookmark Teller 24e to get there directly without having to go through our regular website. Just go to: www.teller24e.com and you’ll be here: 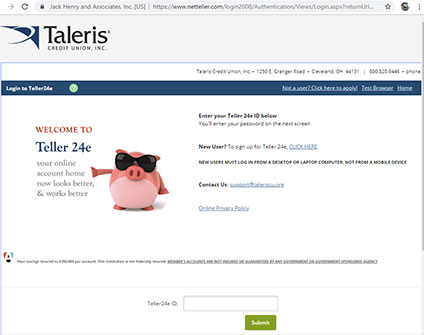 You’ll notice that the location bar on your browser says: https://www.netteller.com/login2008/Authentication/Views/Login.aspx?returnUrl=%2ftaleriscu  That is the official URL of our Teller 24e, and you can bookmark that page, once you are there. Using that bookmark, or typing in www.teller24e.com to your location bar, both will get you to the same place.

And, don’t forget, you can bookmark our main site: www.taleriscu.org for the latest Taleris news, events and special offers.

2019 Board of Directors Election

The Taleris Credit Union Nominating Committee has announced that there are a total of two (2) candidates running for two (2) open positions on the 2019 Board of Directors. Both of the candidates are incumbent (current) board members.

No other candidates have submitted an application for candidacy at this time.

We have posted bios of both candidates on our website at: www.taleriscu.org/election/. You can log on there to find out more about both men.

Any individuals who further desire to be considered for candidacy must submit a Petition for Nomination. To obtain the petition, please call 800.828.6446 ext. 3233 or email volunteer@taleriscu.org. Once completed, mail the form to the TCU Nominating Committee • 1250 E Granger Rd • Cleveland, Ohio 44131 by November 11, 2018. You may also drop off the petition at the same address.

You are leaving www.taleriscu.org. Taleris Credit Union does not provide, and is not responsible for, the product, service, or overall website content available at a third-party site. Taleris Credit Union neither endorses the information, content, presentation, or accuracy, nor makes any warranty, express or implied, regarding any external site. Our privacy policies do not apply to linked websites. You should consult the privacy disclosures on any linked site for further information. Thank you for visiting our website. By clicking Continue, you will be directed to Adobe.com

CALL FOR BOARD NOMINATIONS

TALERIS NOMINATING COMMITTEE IS SEEKING 2019 BOARD OF DIRECTORS CANDIDATES

The Taleris Nominating Committee is seeking candidates for positions on the Taleris Credit Union Board of Directors. As a director, you will be responsible for working with management, fellow board members and other volunteers in an effort to shape the future of Taleris. As a volunteer, your commitment will be  approximately 4 to 6 hours per month and your input will be highly valued.

General business experience is preferred and a desire to help others is a must.

Nominations will be accepted through September 4, 2018. To apply, please forward your name, address and phone number to: TCU Nominating Committee, 1250 E. Granger Road, Cleveland, OH 44131. You may also hand deliver your information to the same address. If you have further questions, please call 800.828.6446 ext. 3233 or email us at: volunteer@taleriscu.org.

NOW SERVING ALL OF NORTHEAST OHIO

We are now, truly, a credit union for all of Northeast Ohio!

…AND No Payments for 60 Days

FOR A LIMITED TIME we’ve got personal loans at rates as low as 6.99%*.  PLUS, you’ll have no payments for 60 days. So, pay off some high interest credit card debt, do some repair work around the house, or take a little vacation to someplace nice.

*Taleris Credit Union unsecured loan promotional offer is effective as of 06/01/2018 and supersedes any and all previous Taleris Credit Union unsecured loan promotional offers. *Membership eligibility is required with a minimum deposit of $5.00 in a share/savings account. Member must be in good standing with TCU. May not be combined with any other promotion or discount. A $50.00 loan processing fee will apply. At the promotional rate of 6.99% (Platinum Credit Tier), a $2,000.00 loan with a 24 month loan term will have an Annual Percentage Rate of 9.398% APR and monthly payment of $93.72. Promotional rate available for signature loans. Promotional Signature Loan may not be used to pay down an existing TCU debt. Subject to change or cancellation without notice.

This is a New Funds Promotion. ‘New funds’ means money that is not currently on deposit with Taleris, or money that has been deposited with Taleris within the last 30 days.

Change is never easy, but it is usually necessary.

Taleris has been publishing a printed quarterly newsletter for our members for many years. But, with the rising costs of printing and postage, we have made the decision to stop production on our printed newsletter effective July 1, 2018.

No worries though… we will be publishing the Taleris quarterly newsletter now in three (3) digital formats for your convenience: 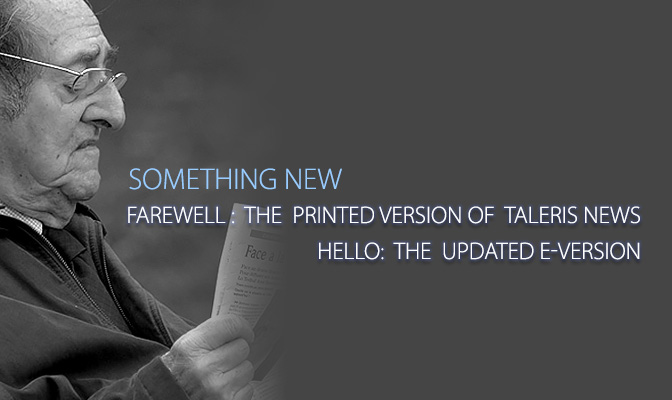 •  A screen-friendly version that will be available on our website.

•  A PDF file that you can view and print if you prefer a hard copy.

•  As a screen reader-friendly RTF file for our members who may be visually impaired.

Give these new versions a try and let us know what you think!